John and Doris Sweeney began making deer feeder timers in the late 1960s. At the time, John owned a clock and speedometer repair shop. A few customers brought in some homemade timers for repair. In order to serve his customers better, he began making his own timers - they were an immediate hit. From the very beginning, we stressed quality products and customer service.

By 1970, we were making unique deer feeders to go along with the timers - once again emphasizing quality. As sales grew, John and Doris moved the business to their ranch in the Hill Country about a mile north of Welfare, Texas. We incorporated in May of 1973. For the next 20 years, the company grew and flourished - basically pioneering the wildlife and fish hatchery feeding industries.

John's and Doris' commitment to the customer was exceeded only by their commitment to family. All the Sweeney children, John Jr., Don, Ellen, Sherry and Zach along with cousins and in-laws played important roles. John & Don developed some of the company's most successful products. Ellen's husband, Bill Collie, worked side by side with John and Doris for 24 years as the company's first and foremost General Manager.

It didn't take long for the Sweeney's to realize that we had another new family - our employees. We have been constantly impressed with the quality of people that have worked with us over the years. We have grown to love them as family. Their hard work and constant commitment to the company and its customers are the reasons we still exist, and flourish, today.

My father, John Sweeney, passed away more than 10 years ago leaving the company to his wife and kids. My wife, Kim, and I bought a majority of the company from Mom a few years ago. We occupy a modern 15,000 square foot sales and manufacturing facility just yards from the original site. We are still fully committed to quality products, customer service, and family values. 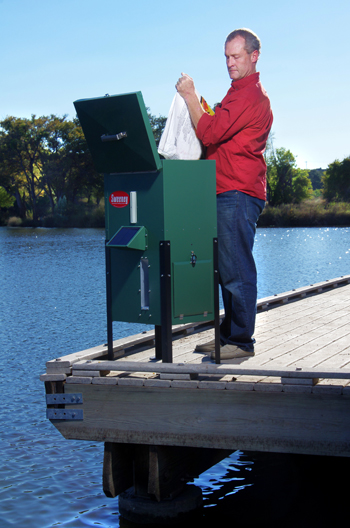 We built our first timer over 35 years ago. With that timer, we established a constant determination to build quality products that meet our customers' needs. This unwavering focus on quality products and excellent customer service is the foundation of Sweeney Enterprises. Today, we are firmly established as the quality leader of feeding equipment for wildlife and fish (ponds and hatcheries). Over time, our equipment has become the most valuable in the market.

We carry a full line of Wildlife & Deer Feeders, Directional Pond & Lake Fish Feeders, Water Garden (Koi) Feeders, Aquaculture (hatchery) Feeders, Automatic Protein Feeders, Automatic Bird Feeders, and Livestock & Companion Animal Feeders. We are determined to build quality products that meet our customers' needs. Because of this, you can depend on your Sweeney Feeders to Feed On-Time, Every Time, for a Long Time!

If you would like for us to let you know when new products are available, sign up for our electronic newsletter.